Welcome to Parkrun – Free, Weekly, Timed 5k Runs in a Park Near You

Parkrun was started by Paul Sinton-Hewitt when he was injured as a way to keep in touch with his running mates. He timed their 5k, and then they all went for coffee together. Twelve years later there are almost 1,000 5k parkruns across 14 countries every Saturday 3.6 million parkrunners are registered globally, with someone new signing up every 29 seconds. Full history report can be found on the link: http://blog.parkrun.com/uk/2017/06/23/a-social-movement/

Parkruns are open to everyone, free, and easy to take part in. These events take place in pleasant parkland surroundings (local parks to National Parks), and people of every ability are encouraged to take part–from those taking their first steps in running to Olympians, all are welcomed. Once registered, parkrun participants must print and use their unique barcode number when competing in any of the events. Using the events page on the website, http://www.parkrun.org.uk/, participants select the event they are most interested in and review all the information. The extensive results page has an incredible amount of information about each parkrun venue, every participant and every running club (Lou, you will be impressed on the amount of data).

With 11 parkruns in a 15-mile radius, I am not short of a 5K course for Saturday mornings at 9:00 am. An added incentive is that Kimberworth Striders Running Club has an age graded competition using a different parkrun each month. To date, I have run eight including: 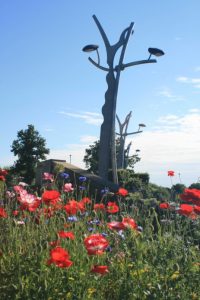 A Green Flag Award winning district park with a difference.   Managed as a naturalistic landscape, it covers 24 hectares and lies just within 2 miles of Sheffield City Centre. A 3 lap hilly course finishing time 21:25 (79.07%) setting the Vet Male 65-69 record my best time (so far). 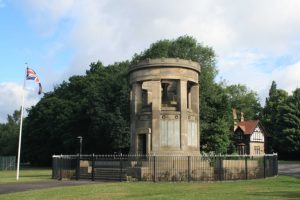 Established as a public park in the early 1890s and officially opened in 1893, it sits high above the Calder Valley so a very apt name! The run begins just above the Boer War memorial; a bronze figure atop a red granite base. It has an uphill start, and at approximately 400m, at the summit of the first climb, you negotiate around the Neo Classical War Memorial which was built in 1924 to commemorate those lost in WWI & WWII. Engraved words above the entrance door read “Honour-Love-Duty-Sacrifice.” It includes one small lap, which is then followed by three large laps all including the initial ascent and concludes on the same hill. It’s a tricky course, but it’s such a lovely little park you’ve just got to forgive its topography! Finishing time 21:46 (77.79%) 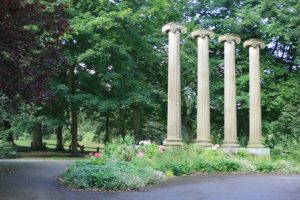 Locke Park is a great example of a Grade II listed Victorian Park. It is named after the renowned railway engineer Joseph Locke (1805-60). He is recognised as one of Barnsley’s most prominent figures of the 19th century. The original park, then called People’s Park, was opened on June 10, 1862. Joseph Locke’s widow, Phoebe, had given High Stile Field to the town on April 24, 1861 to be a park in memory of her husband.  Further additions to the park, now called Locke Park, were officially opened on August 7,1877. Locke Park has been held on trust by Barnsley Council since the I860s for the people of Barnsley.

Park Runs are spreading over the pond with four in the Maryland-DC region: